Get answers to all your questions

ComprasPT is a certified Public e-Procurement platform which manages all your public procurement procedures in a quick, simple and intuitive way.

This electronic platform ensures the compliance of all requirements imposed by the new Public Contracts Code (PCC), to which public institutions are linked. It also ensures an easy and fast registration, resulting in more competition and better prices for the acquiring entity!

Buyer or Acquiring Entity or Contracting Entity – all entities to which the 2nd article of Public Contracts Code (PCC) applies:

b) The Autonomous Regions;

f) The Bank of Portugal;

i) Associations to which belong one or more legal persons referred to in the preceding subparagraphs, as long as they are mainly financed by them, subjected to their management control or possess a management, administrative or supervisory body whose majority of its holders would be, directly or indirectly, designated by them.

a) The public-law bodies, being considered as such any legal person that, regardless of their public or private nature:

i) Have been created specifically to satisfy the necessities of general interest, without an industrial or commercial character, being regarded as such those whose economic activity is not submitted to the competitive basis of the market, namely due to not having profit motives or because they don’t assume the losses resulting from their activities; and

ii) Receive a majority of their funding from entities mentioned in the preceding paragraph or by other public-law bodies, or its management is controlled by those entities, or possess management, administrative or supervisory bodies whose members have, in more than half of the total number, been designated by those entities;

b) Any legal persons that find themselves in the situation referred to in the preceding subparagraph, regarding to one entity that is, herself, a contracting entity in accordance with the same subparagraph;

d) The associations to whom belong one or more legal persons referred in the preceding subparagraphs, provided that these are majorly funded by them, being subjected to their management control or possess a management, administrative or supervisory body whose majority of its holders would be, directly or indirectly, designated by them.

Seller or Economic Operator or Supplier – Any natural or legal person that in the scope of Public Procurement provides products and/or services to the entities mentioned above.

Requirements for the use of ComprasPT

I have completed my registration, how long does it take to be available?

In case you have lost access to the ComprasPT electronic procurement platform, due to the use of a new qualified digital certificate, all you need to do now is to associate this new certificate to your registration, by following the steps below.

Go to the ComprasPT page of a contracting entity of your choice and select the "Recover Access" option: 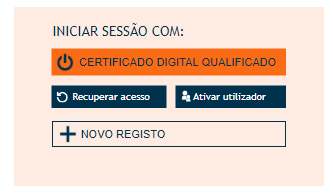 This process consists of identifying the company and the user for whom access to the platform must be recovered. 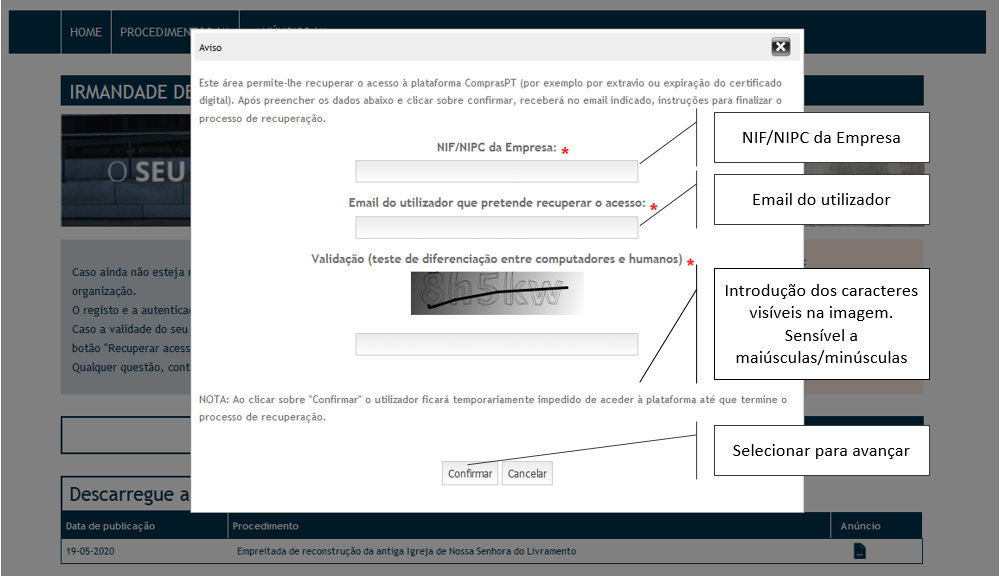 After carrying out this procedure, the user in question will receive an email with a validation code (it may take up to 10 minutes). This information is displayed on the platform page:

After receiving the email with the activation code, you must activate the user by selecting the option "Activate User" on the ComprasPT page of the contracting entity.

The following window will be displayed:

Fill in the gaps referring to the company's NIF, email address of the user who is recovering access, enter the activation code received in the email and click "Continue".

Then, access the option "List / update certificates" and add the new Qualified Digital Certificate that is inserted in your machine by clicking "Add", in the list of certificates.

We take this opportunity to inform you that a CDQ - Qualified Digital Certificate contains sensitive information concerning the person and/or organisation to which you belong, even if it is out of date, i.e. it has already expired. In order to avoid damage resulting from improper use or unauthorised access by third parties, we advise you to destroy the device in order to invalidate it permanently.

What are the Timestamps for?

The timestamps attest the date and time of the creation, emission or reception of a document, being a legal requirement in the scope of public e-procurement. For that reason, it is impossible to submit documents or send notifications, in any platform, without using this timestamping service. The timestamps ensure not only the date and time of the action but also the integrity of the data.

How does the stamp consumption work in ComprasPT platform?

In ComprasPT platform, only one stamp is spent by submission, regardless the number of submitted documents.

Can I use Timestamps of other providers?

Yes, according to Law no. 96/2015 of August 17 the public procurement platforms are obliged to accept the timestamps issued by any electronic certification entity which possesses that same service registered and published in the Trusted – Service Status List (TSL).

How can I get the Timestamps?

How long does it take for the Timestamps to be available?

The Timestamps are active in within no more than 24 hours, after payment confirmation.

What is a Qualified Digital Certificate?

Qualified Digital Certificate is an electronic method used to identify a person in the platform or in a digital system that provides secure services through the Internet.

How can I get a Qualified Digital Certificate?

How much time does it take to get a Certificate?

On average, a Qualified Digital Certificate takes 5 working days. Urgent requests are issued within 24 hours, but have to be collected by the holder in the Issuing Entity facilities.

Can I use my Citizen's Card to register?

Yes, the Citizen’s Card is a Qualified Digital Certificate.

My QDC is not working. What can I do?

Why can I only see the procedure notice?

If you can only see the procedure notice, you may be in one of the following situations:

b. You are already logged in, but you did not yet express interest in the procedure.

First, you must login and access to the ongoing procedures list. Then, once the intended procedure is found, express your interest by pressing the “Enroll” button. As soon as you are enrolled in the procedure, you will be able to access the remaining documents.

Notice that this button is only available until the “Tender Opening” phase.

Why can’t I find the “New” option in a procedure?

If you can only find the Notice, you are probably not registered in the procedure. Access the on-going Public Tenders page, find the procedure in question and click on “Register”. If you can see the remaining documents, please check the current stage of the procedure. In some stages, it is impossible to submit documents.

I have already submitted my proposal. Why can`t I see the loaded documents?

During proposal submission, the documents are encrypted and they are only available again after being opened by the Buyers (Contracting Entities), period in which the documents become also available to all competitors.

Are the loaded documents signed?

During the submission process, the platform automatically stamps all documents with a signature that will correspond to the certificate used to login.

If this certificate does not belong to the person with representation powers, all documents must be signed before the submission, using a Qualified Digital Certificate.

What types of Pre-Contractual Procedures does the PCC provide for?

What is a Prior Consultation?

A Prior Consultation is a procedure in which the contracting entity invites at least three entities of her choice to submit a proposal.

Which contracts can be celebrated by Prior Consultation?

What is a Negotiation/Direct Award Procedure?

A Negotiation/Direct Award Procedure is a pre-contractual procedure through which the contracting entity invites one entity of her choice to submit a proposal.

Which contracts can be celebrated by Negotiation/Direct Award?

What is a Simplified Negotiation/Direct Award Procedure?

What is an Urgent Open Tender?

What is an Open Tender?

An Open Tender is a selective process that aims to evaluate the competitors in a certain tender.

Do we have the right to a free customer service?

Yes. You can always contact our Technical Support. Technical support.